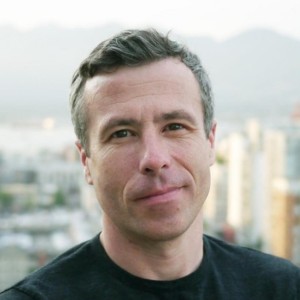 I met the future of aquaculture in a nondescript seminar room in Seattle in 2017. We were sitting at the same table waiting to hear an orientation on Fish 2.0, the biannual start-up competition. He had recently graduated from Princeton with a degree in engineering. He had no experience in the seafood industry, a proverbial fish out of water. His name was Bryton Shang.

Five years later, his company Aquabyte has raised $23.8 million USD in venture capital and is pioneering artificial intelligence in aquaculture. Shang isn’t alone. In that two-year period, from 2017 to 2018, 20 new aquaculture start-ups were launched.

Aquaculture has seen a remarkable explosion in innovation in a short period. Half of all the software apps in the industry have been launched in the last five years. Of the 73 software apps I’ve identified for aquaculture, 71 percent use machine learning or deep learning algorithms, and 52 percent deploy computer vision and image-recognition algorithms.

Money is now pouring into the sector. According to Crunchbase, the top ten aquaculture tech firms have raised about $135 million USD with Montreal-based XpertSea leading the pack ($29 million USD) followed by Shang’s Aquabyte ($23.8 million USD). Aquaculture now makes up 52 percent of global seafood production and fish prices have risen in real terms by more than 60 percent, according to the FAO’s Fish Price Index. The rising cost of seafood and declining costs of tech spells opportunity for many investors.

And while Silicon Valley is the biggest driver of tech overall, it’s tiny Norway with only a population of 5.4 million and 1.65 percent of the world’s aquaculture production that is punching above its weight. About 20 percent of aquatech companies are headquartered there. Shang, for example, founded his company in the U.S. but spends a lot of his time in Norway. In contrast, Asia produces 89 percent of the world’s farmed seafood but has only generated 22 percent of tech companies in the sector.

According to the FAO, finfish aquaculture production in 2018 reached almost $140 billion USD in farmgate value or 53 percent of all farmed aquatic animals. Yet 78 percent of aquaculture software is built for finfish farming and 36 percent for shrimp whose farmgate value was only 26 percent of total farmed animal production. The one area where we’ll likely see growing tech investment is in recirculating aquaculture systems (RAS), as water quality conditions worsen, and environmental regulations tighten.

The application of artificial intelligence in aquaculture—primarily machine learning and deep-learning neural networks—really began after 2010. Some companies were founded prior to this date but likely adopted AI only in the last decade or even later. One business survey identified that barely 10 percent of companies employed AI in 2015. Today, the number is above 50 percent and growing fast.

Data has often been called the “new oil.” If algorithms are the engines, then data is the fuel that is bringing about the fourth Industrial Revolution, known as Industry 4.0. From 2010 to 2020, the estimated amount of digital data on earth has gone up 30-fold. This is the same period in which we see the launch of AI-driven applications in aquaculture.

Sensors are to AI as wells are to the oil industry, pumping enormous quantities of data into the world.  Water quality sensors, cameras, satellite imaging and hydroacoustic devices make up what is known as the Internet-of-Things or IoT in aquaculture. It’s cheaper and easier than ever to deploy remote sensors to collect data—the jet fuel that has launched many start-ups in the past five years.

Now, about 73 percent aquaculture tech companies deploy at least one type of sensor, including half which use cameras. The algorithms, too, are improving exponentially. In 2015, a machine beat humans in an annual image recognition challenge.

What does artificial intelligence do that regular software can’t? The main difference is that AI can learn through training on datasets. In general, the more data the smarter the AI. Rob May, the Co-Founder and CEO of Talla, has developed a simple tool to understand the use of AI in a specific industry. The PAC Framework stands for Predict, Automate and Classify—”three things that current AI technologies can do really well,” according to May.

In the framework, May lays out Predict, Automate and Classify on one axis and core business operations on the other. For aquaculture, I’ve simplified this into production, fish health and water quality. Feed, mortalities and maintaining water quality are also the largest cost centres for farmers and so no surprise that these are the pain points trying to be solved by AI.

Some of the first software for aquaculture was focused on basic digitization. About 40 percent of apps have some basic farm management functionality to manually record provenance, growth, water quality, harvests, feed usage and so on. These companies include Wattaya Aqua, iQuatic and Jala in shrimp and AquaManager, AquaTracker and Blue Trace for fish and shellfish, among others. About 44 percent of the software monitors water quality which is obviously very important for aquaculture.

As for AI, about a third is being used for estimating biomass or forecasting growth (41 percent), optimizing feeding (33 percent) or monitoring health or predicting disease outbreaks (26 percent) or counting sea lice (7 percent). A lot of this data is being collected using underwater cameras and analyzed using imagine recognition algorithms.

As the aquaculture tech market matures, we’re likely to see fewer new start-up launches and more mergers and acquisitions as companies consolidate their market share. Many companies still struggle to have their technologies adopted by small-scale farmers in the developing world.

Deploying technology in vertically integrated farming operations in Norway, Canada or Chile is one thing, but scaling software among Vietnamese or Indian shrimp farmers is a herculean task. Just ask XpertSea or Aquaconnect. Both companies pivoted into financing and developing marketplaces to connect shrimp farmers to buyers to incentivize technology adoption.

Still, as the cost of sensors declines and algorithms improve, it’s just a matter of time before there’s widespread adoption of digital technologies in low-income countries. Education and training are also becoming more accessible and cheaper thanks to online learning. We’re likely to see more innovation being driven out of places such as India, Vietnam, Thailand, Philippines and Indonesia.

RAS and cellular aquaculture offer new opportunities for disruptive innovation and growth as well. The boom in plant-based proteins could also drive growing demand for algae and seaweed.

“[Digital transformation] means being able to help farmers adopt the latest machine learning technologies to make their farms more efficient and sustainable,” says Bryton Shang of AquaByte. “For the first time, farmers can weigh fish and measure growth in real-time – in the future people will wonder how did we ever grow fish without these types of tools.”

NEXT UP: Our next post in our AI Guide series will focused on AI and software adoption in wild capture fisheries. Please sign-up for our monthly newsletter Catch-Up to receive the next post. 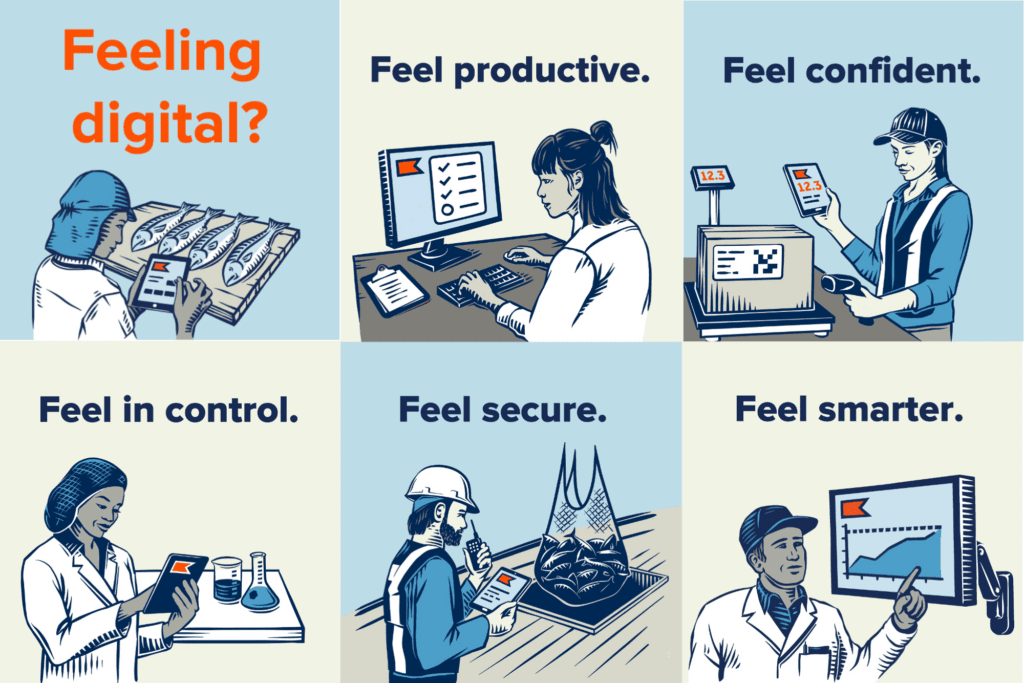 ROI of Digital Transformation: The emotional benefits of going digital

Indeed, feelings are likely the last thing that captains of the seafood industry think about 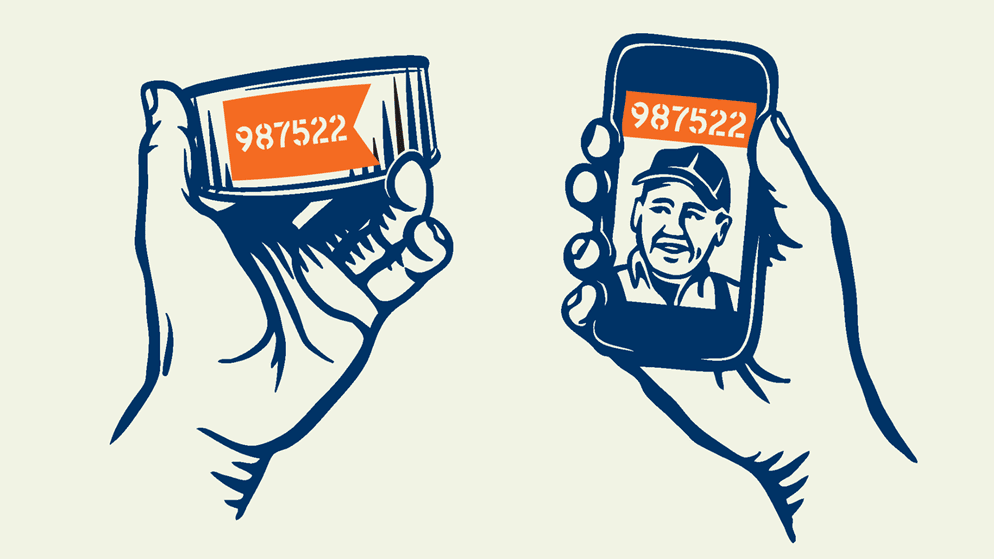 The pandemic has created a “new normal” in more ways than one. Two fundamental changes

CATCH-UP WITH THE LATEST NEWS IN SEAFOOD

Catch-Up is our general newsletter, bundling monthly top reads in the seafood industry with exciting evolutions and news about our company and field.